After a pleasantly uneventful flight (and arriving a bit early, before 9:00 am), we stepped out of the terminal at Charles de Gaulle airport in Paris and followed the signs to the train station area. We knew we wanted to take the RER B train into Paris and then would take the regular metro, but we had a little trouble figuring out how and where to get tickets and the train itself. We finally found the rather hidden ticket office, and after buying our tickets, asked to make sure we knew which entrance got us to our train. Once on the RER, the ride was fairly smooth, and we talked to a guy from Australia and a couple from Michigan. Getting off at a main train station, Gare de Nord, we took the metro to the stop nearest our hotel and walked the rest of the way.

We checked in at Hôtel L'Échiquier Opéra Paris around 1:00 pm, stowed our stuff, and took off to get some lunch. We grabbed a sandwich and some tabouli from the Monoprix grocery close by, as well as a coffee from a café down the street. After lunch, we purchased a carnet, which is a 10-pack of metro tickets, and went back to Gare de Nord to buy our train tickets for our upcoming trips from Paris to Bayeux and from Bayeux to Avignon.

In her online research, Ginger had found some paper stores, so we located them on the map, rode a few stops on the Metro to the Opera station, hit L'Art du Papier first and then then went on to Le Carre d'Encre. Then we walked back to the Palais Garnier (the famous opera house).

We thought a trip to Paris wouldn't be complete without at least a look at the Eiffel Tower. Walking past the Tour itself and through the Champ de Mars, we decided to head back toward the hotel and stop for dinner along the way. We opted for a Döner Kebab place, sharing one meal between us because we knew how big they typically are. It was plenty! Lastly, Neil went down the street for a coffee from the same cafe we'd stopped at earlier, where he ordered a café allongé with un peu du lait, saying "sí" instead of "oui" at least twice in the process. Bed time was about 8:30 because we were worn out from the overnight flight.

Photos from the day in Paris (25 images) 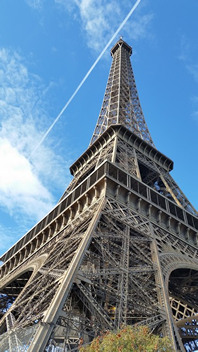