Friday, September 13 - On to Bayeux

There wasn't a whole lot on our schedule this day, but it was far from relaxing. Because of the transit workers' strike, transportation was going to be tricky, as there was certain to be more traffic than usual since other modes of transportation like taxis and buses were in high demand. After a tasty breakfast and checking out, we decided to tempt fate and walk the "22 minutes" from the hotel the train station, Gare Saint Lazare. We gave ourselves an hour, and actually left before we planned. It actually took over 35 minutes - apparently Google maps doesn’t take into account people pulling suitcases, weaving through crowds, and stopping to double-check directions at major intersections.

A couple photos from the morning (2 images)

We indeed got to Gare Saint Lazare in plenty of time before our train, glad that we had the extra time to find the right platform and glad we had already purchased our tickets. And after boarding, we sat for an extra 30 minutes or more because one of the doors wouldn't close properly and maintenance had to be called. Other than that, the ride to Bayeux was pleasant, with one stop at Caen and nice views of the countryside.

We chose to visit the city of Bayeux for its charm and to see the Bayeux Tapestry Museum. This was the first city liberated by the Allies in WWII and is amazingly well preserved since it escaped the bombing raids of the war. For WWII buffs, it’s also a central point for tours of the D-Day beaches and foreign cemeteries.

Because we were booked to stay at the somewhat distant Château de Sully instead of in the city center, we had planned to stow our bags upon arrival at a certain place we’d found out about. However, upon arrival and getting our bearings, the route to the storage place was uncomfortably sketchy, so we improvised and huffed it to the city center for lunch. We chose a pizza restaurant for a (late by now) lunch. But... the only cook there sliced his finger wide open, so they had to shut the kitchen down and get him to the hospital. Thankfully, right around the corner we found a lovely café where we had Croque Monsieur (grilled cheese) and Croque Madame (grilled cheese with egg) along with super fresh French fries and a salad. Delicious! The café was nice enough to call a taxi for us, and the taxi driver was nice enough to take us to our château, wait for us to check into the hotel, and take us back into town. We think Ginger's ability to converse in French had a lot to do with that!

The number one attraction in Bayeux itself is the Bayeux Tapestry, a 70-meter long embroidered tapestry that tells the story of William the Conqueror and the Battle of Hastings in 1066 AD. Inside the museum, a well-done albeit fast-paced audio guide leads visitors from one scene to the next — over 50 in all — along the length of the tapsestry. Afterward, there are a few artifacts from the time period on display, along with some reproductions of the methods used to make the tapestry, and several stations with informational plaques explaining the times and the people the tapestry records. The tour finishes with a film as well... so when you're done, you pretty much can't help but know the story since it's reinforced so many ways.

After the museum tour, we still had a bit of time, so we strolled around the cathedral and back into town center. Having seen the one and only choice for food at the isolated hotel — 2- or 3-course dinners for 65€ or 89€ — we decided that 4€ sandwiches we our best bet, so we picked up a couple from a little sandwich shop. We walked the 20 minutes or so to the train station, since that was about the only way to ensure getting a taxi without bothering a shop worker to call one for us. Our taxi driver this time was really cool too — the tariff was 13€, but he just charged 10€.

Photos from around Bayeux (37 images)

Back at the château, we had our sandwiches for dinner — plenty, especially because we had a big late lunch — and then took a walk around the château grounds for some photos. It was getting late, so after we spent some time planning out the next day, we called it a night.

Photos from around the Château (24 images) 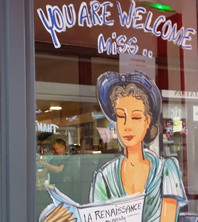 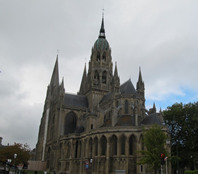 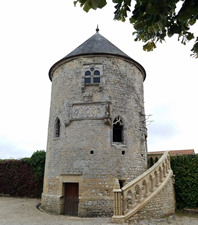