Saturday, September 14 - A Day in Bayeux

We ate breakfast at a leisurely pace and then took a taxi into the city, getting dropped off at the open air market held every Saturday from 9:00-1:00. This market has it all! Vendors sell everything: jewelry, clothes, furniture (even mattresses!), live animals like chickens, ducks, and rabbits, seafood, produce, breads of all kinds, as well as prepared foodstuffs like curries and paella. We got our fill of the scene without actually buying anything (even though we did want to “resuce” a rabbit and duckling or two). Then we dropped in at the Tourist Information Office and picked up a booklet describing the area and happenings.

The only other thing we really had to do that was time-sensitive was watching a candy making demonstration at the confectionary store, Confiserie Artisanale Ladynath, which Ginger found out about in the tour book. They sell many types of candy including nougats, flavored marshmallow bars, hard candies, and even liquid candy you can spoon out of a jar! The store does live demonstrations each Saturday at 11:00. A quite renowned confectionary expert, Nathalie Goalen, explained the ingredients and processes as she mixed, colored, flavored, stretched, and oxygenated big blobs of warm sugary stuff, coloring one third red in order to make several kinds of two-toned hard confections. It was quite fascinating! When the demonstration was over, we purchased a few selections from their vast choices of candies and were on our way.

Photos from the morning (35 images)

We returned to the main route by way of the cathedral, taking a bunch more pictures, and walked around inside for a bit. As with most French cities (and many throughout Europe), the cathedral is large and impressive, built to be the focal point of the city centuries ago and still dominating the skyline. After the cathedral, we walked to the more modern city center again, perusing some shops. While the "old city" around the museum had a lot to do with William the Conqueror (see previous day), the newer modern part has a lot to do with D-Day, with tributes to British and American forces liberating France from Nazi occupation during World War II — many "murals" are painted on shop and restaurant windows, mostly depicting people thanking the Allied forces for their heroism.

From the center of town, we chose to do some of the Northern part of the river walk, a marked city stroll on mostly gravel paths along the river through a couple parks.

Rick Steves' guide book about Normandy suggests several eateries, and Ginger picked a good one - Le Moulin de la Galette. We each had a savory "galette", a buckwheat crepe with stuff in it... in our case, ham and cheese in both, Ginger's with an egg and Neil's with walnuts and honey. After finishing off with an after-lunch café allongé, we set out for more of the river walk, this time to the South near the train station, through open marshy fields with distant views of the cathedral.

Done with everything we wanted to see in Bayeux, we decided to get a taxi back to the château a little early and just hang out for a bit on the back patio. Our travel was to be early the next day, so we planned and packed almost all of our stuff before turning in. 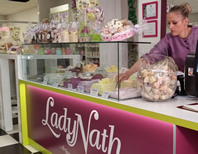 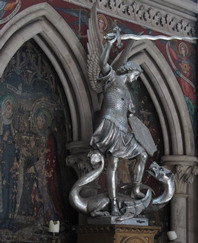