So, we had a conundrum when we’d bought our Avignon tickets. We had only two choices of train times for arrival: get up early in Bayeux to get to Avignon around 3pm, or take that morning at a more liesurely pace and get to Avignon late, around 9pm. We weren't willing to chance getting in late and finding our hotel in the dark, so thankfully, our château hosts were willing to let us grab breakfast just before the designated opening time and call us a cab to pick us up at 8am sharp. Even though we were rushed a bit, we juuuuust had time to check out, scarf down a decent amount of breakfast including a coffee and a half and get our taxi right at 8:00. After an easy ride to the train station with no Sunday traffic, we waited a few minutes and hopped on the train bound for our Paris connection.

Paris was a bit of an adventure, but we planned well and this wasn't our first rodeo, so we were able to pretty efficiently arrive at one big train station (Gare Saint Lazare) and get to a different station (Gare de Lyon) to catch our train to Avignon, all within 45 minutes. Leaving the "trains" part of Saint Lazare we got to the "Metro" part and hopped on Line 14 with the Metro tickets we already had from a few days before. We rode a few stops to Gare de Lyon, left the "Metro" part and entered the "trains" part, and found our platform with a few minutes to spare.

Leaving Paris for Avignon after double-checking that we were on the right train, Ginger was finally able to relax. About an hour and a half of the journey was a straight shot to the city of Lyon, and after that there were four stops every 20 minutes or so until we arrived in Avignon at around 3:15. The hotel was about a 10 minute walk, straight down Rue de Republique directly in front of the train station.

Photos from the train ride (10 images)

We were excited to meet Ginger's friend Janel at our hotel for the second half of our trip. Janel had booked the same hotel and arrived an hour or so before us. We stayed at Hotel de L’ Horloge (Hotel of the Clock) on Place de L’Horloge (Clock Square) — it was gorgeous and perfectly located in the center of town!

After taking a quick shower (Paris stress made us sweat a bit and Avignon in the South is much warmer), we talked a few minutes in the lobby and then set of for some sightseeing. Rick Steves' guide book came in handy yet again, providing a "back streets" walk, which was great this particular day because it was Sunday and since most shops were closed, there weren't hoards of annoying tourists. :) After grabbing an afternoon coffee, we walked along the old city wall for a bit, then back toward Rue de Republique, from which we were able to get our bearings the whole time we were in Avignon. Then it was time for dinner... what better place than Istanbul Express Snack Kebab? We each got a pita-type kebab sandwich "avec frites" (with fries). At this location "with fries" meant having the fries on top of the sandwich inside, rather than as a side.

Photos from around Avignon (42 images)

Our hotel had a salon, a sitting room, on the 1st floor (above the ground floor) with a coffee machine, several places to sit, and many things to read. The three of us sat and chatted for a time in the evening and we caught up on life while Neil sipped a coffee of course... oh, and we finished off some of the desserts we got from LadyNath the day before. After planning our activities for the next day, we were off to bed.

Photos from the evening (5 images) 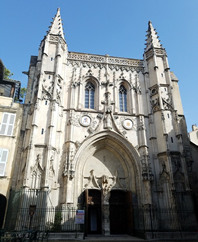 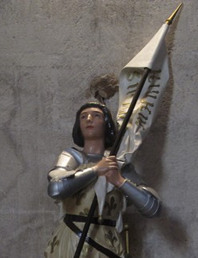 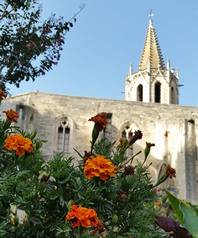