Monday, September 16 - A Day in Avignon

This was a day of exploring Avignon. We decided to do the main outdoor walking earlier in the day, so after breakfast in the cozy breakfast room we went Northward from the hotel to the river. After snapping some pictures of the nice views of the Rhône river, we took the free "Navette Fluviale" (small ferry boat) across the river, walked up the left bank, admired the broken Pont St Bénézet (St. Bénézet's Bridge - more on that in a moment), and walked across via the Daladier bridge back into the city.

A combination ticket will get you access to two of the most famous sights in Avignon, the aforementioned St Bénézet bridge and the Palais des Papes (Palace of the Popes). First we visited the famous "broken bridge" that extends only halfway across the river. Centuries ago, it was built at the behest of a guy called Bénézet, a character about whom there are varying legends. There are several records of sections of the bridge being broken, likely weakened by ice and flooding, and eventually anyone planning repairs just gave up and left it broken — a cynic might surmise that the local government thought they'd make money by turning it into a tourist attraction. There is an audio guide with several stations along the way where we absorbed and glazed over quite a bit of info about the bridge's history.

Photos from the morning walk (40 images)

After the bridge, we spent a good long while at the Palais des Papes, featuring an extensive tour throughout much of the complex. We were guided (kind of) by a very detailed "multimedia guide", an actual tablet worn around the neck that featured information in the form of interactive pop up boxes, images, even videos of the elements of many of the rooms. Once done with the Palais tour, we found a place our guide book told us about, Restaurant Françoise, for a late lunch and afternoon coffee.

After walking around the city in the late afternoon and evening, we popped into the tourist office to inquire about transportation for the next day, buses to Pont du Gard and from there to Nîmes. Knowing the next day would start early, we scouted out the bus station before returning to the hotel. Since lunch was so late, we just snacked for dinner and sat in the hotel lounge to confirm our plans for the next day before calling it a night.

Photos from later in the day (9 images) 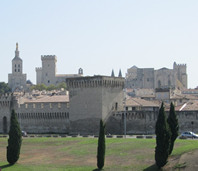 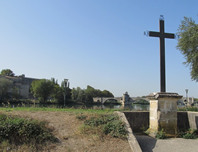 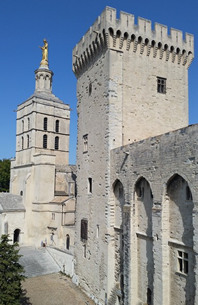