Today was one of the most extensive days of the whole trip – a round trip adventure that included the Pont du Gard and the city of Nîmes. So, good thing the day before was leisurely and didn't keep us up too late, because this morning we had to get up early to get breakfast and head out to the Gare Routiere (bus station) to get the bus to Pont du Gard, still amazed that the bus ride costs only 1,50€ per person.

This site is indeed impressive, living up to all the hype. Built in the 1st and 2nd centuries by the Romans, the Nîmes aqueduct carried water over quite a distance through the countryside of Southern "Gaul" as they called the region, to the city that is now Nîmes. The Pont itself was part of the aqueduct, a gigantic bridge that spans the river, still almost entirely intact. After hiking over and under and all around, it was time to eat our snack lunch outside the visitors' center. Out tickets got us access to the museum also, so we quickly perused the exhibits and then walked back to the traffic circle to catch our next bust to Nîmes.

Nîmes has a heavy Roman influence — indeed, one of the first sites along our walking tour was Arènes de Nîmesm an arena styled much like the famous Colosseum in Rome. Continuing on, after a stop at Rougier et Plé, a craft store Ginger wanted to visit, we reached Les Jardin de La Fontaine, an area with a park, fountains, sculptures, and stone steps going up the steep hillside. Descending back to the city center, we passed the Église Saint-Baudile de Nîmes and Église Sainte Perpétue on the way to the train station. We had arrived by bus, but the best way back to Avignon was by rail, so we bought our tickets and caught the next train.

Whew! What a day. Looking forward to the next leg of our trip, the journey to Marseille the next day, it was lights out. 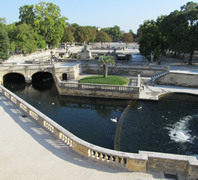 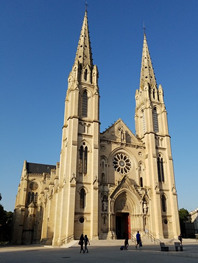