Wednesday, September 18 - On to Marseille

We weren't in a hurry to get to Marseille, and it’s only an hour from Avignon by train, so we wandered around Avignon for a bit, hitting the last place on our list, Les Halles, an indoor market with more or less permanent vendors selling everything food related from meats to breads to cheeses to fruits to vegetables. We didn’t find anything we couldn’t live without, so we continued on to catch a late-morning train to Marseille.

Photos from the morning in Avignon (22 images)

The train ride to the coastal city of Marseille wasn't long, but it sure was a hike to our hotel. Fortunately, it was downhill most of the way, at least from the train station past the "Vieux Port" (old port, like a harbor). We finally found it, The Maison Montgrand Marseille Vieux Port, and checked in, having to cross the street to another section of the hotel in a different building where our room was located. Dropping off our luggage, we set out for lunch, grabbing a sandwich and pizza near the harbor. Then we took a long stroll along the North side of the port, skirting an old fort, but deciding not to spend time at the museum there, passing a cruise ship and arriving at the Cathédrale de la Nouvelle Major. In some respects, all 200-700-year-old cathedrals are alike, basically laid out the same way... but what's unique about this one is all the stripes of marble. Most cathedrals (the ones we've been to at least) have mostly stone walls and columns, but the stripes of marble on the outside are the same as what you see on the inside. Very impressive!

Photos from around Marseille (63 images)

Ginger called Marseille the San Francisco of France because of its hills. We were up the hill at this time, so we worked our way back down toward the harbor. We wanted to go to the other cathedral south of the harbor, the prominent Basilique Notre-Dame de la Garde. This one is set 500 feet up on a peak and thus visible from almost anywhere in the city. We considered our options.. none of us was crazy enough to seriously suggest hiking up to it, considering the walking we had already done and the fact that it was quite late in the day, and public transportation didn't seem to get us close enough. Humorously, we decided on actually taking one of those silly touristy open-car things, "le Petit Train de Marseille". Yeah, it was goofy, but it got us up the hill in a short amount of time and passed by a few historic sites along the way. The "train" dropped us off right at the base of the basilica, and we had enough time to walk around, go inside, and take some photos of the building itself as well as panoramic views of the city.

After riding the petit train down the hill and getting dropped off at the harbor, we went in search of crêpes for dinner. It sure isn't difficult to find crêpes in touristy areas of French cities for a decent price. We picked a particular restaurant, Crêperie Marseillaise, and it sure was tasty! Done with the day in Marseille, we made sure of our travel plans for the following day and then turned in a little early.

Photos from later in the evening (13 images) 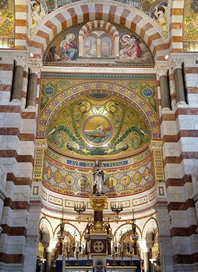