We knew we would be taking a train back to Paris on Friday so that we could just get up and get to the airport on Saturday to start the journey home. Since Janel wanted to spend more time in Paris than we did, she caught a very early train, but we wanted to take it a little easy, so we took our time. Not really realizing it was Friday and “everyone” would be wanting to weekend in Paris, we had to catch a later train than planned, but only by about an hour. Upon arrival but before leaving the station in Paris, we decided to try to get our RER tickets to the airport for the next day, only to be told the RER wasn’t running this Saturday. Strike? Probably. So we made plans to ask at the hotel what their recommendations were.

A few photos from Marseille in the morning (11 images)

This time in Paris we stayed at L’Hôtel Opéra Cadet. It was gorgeous and comfortable even for just one night. We were told a taxi to the airport would be about 50€, but the "Roissy Bus" was much cheaper and left regularly from a station by the Opera house not too far away.

Photos from the train ride (5 images)

After checking in to the hotel, we grabbed just a few things and set out for a walk. It had been pretty hot the entire trip, but this evening in Paris was much more comfortable. We found the Roissy Bus pickup point and went ahead and got our tickets for the next day, knowing it would likely be crowded due to the RER not being available. Since we were near L'Art du Papier where we had visited a few days before, we stopped by there for another look. Neil wanted to do a little excursion as well, realizing that the Jardin des Tuileries wasn't toooo far away, so we set out in that direction. At the West end of the garden at Place de la Concorde, we were rewarded with views straight down Avenue des Champs-Élysées to the Arc de Triomphe, and of the sun setting a few degrees from the Eiffel Tower.

We had passed a Crêperie on the way to the Roissy Bus stop earlier and backtracked to it... but it was closed! Imagine that — a Crêperie on Rue la Fayette, one of the main arteries in Paris, closed before 8:00 on Friday! So we consulted our trusty phone map and found an alternative — just a couple blocks from the hotel is Caramel Sarrasin, where we had a couple tasty ham-and-cheese type crêpes and shared a sweet one with honey for dessert. Back at the hotel, we hung out with Janel a bit, planning to meet up for breakfast and trading information about getting to the airport the next day.

Paris in the evening (36 images) 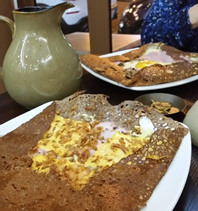