Callie is an Austrailian Cattle Dog mix, maybe 7 years old by now, that we adopted from Operation Kindness in Carrollton. When we introduced Maverick to her on site, the two got along great, and she integrated into our family very well in just a short time. She was a few notches higher in her energy level than any dog we've had in a while the first couple years we had her, being Neil's running buddy for 2-mile runs around the neighborhood a few times per week. She's slowed down a bit as she's gotten older, but etill loves to chase her tennis ball in the back yard, and she gets plenty of exercise playing with her little sister Maya nowadays.

Stella is a 5-year-old Austrailian Shepherd mix we adopted from Grapevine Animal Services. When we took Maverick and Callie to meet her, there weren't any problems, but she sure was shy and clung to the manager there since she was used to him and wary of us. Over the first few weeks, she came out of her shell a bit but was still is wary of Neil, clinging to Ginger sometimes in a kind of protective way. It took a while of trying some different things, but she finally settled in!

Our newest is Maya, a Black (or, very, very dark Chocolate) Lab mix adopted from Apollo Support & Rescue in May 2020. It took right at 2 weeks with us for her to figure things out, but she's getting along great now. She sure is a bundle of energy, requiring a few minutes of playing rough, usually with Callie, at least a couple times a day. We usually are able to ensure that it's in the mornings and evenings before and after work, herding them into the back yard so they have some room to run. 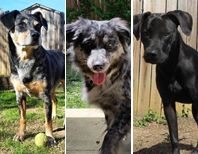