Not knowing how busy DFW airport would be, especially with regards to our international flight on September 11, we decided to get to the airport in “plenty” of time... leaving the house at noon got us there about 12:30, more than 2 hours before our 2:55 flight. We boarded our American Airlines 767-300 right on time, around 2:30, and expected to take off right away. But no – two delays set us back about 2 hours and 15 minutes. There was lightning nearby which caused all the runways to be closed for about 30 minutes; then, just as the pilot announced that we were cleared for takeoff, a mechanical difficulty popped up, something to do with the rudder controls. A maintenance crew was summoned, and around 5:00 it was announced that the crew did some troubleshooting and found out that someone had left a switch in the “test” position, restricting the rudder angle. We felt better that it was someone's bonehead move rather than a true mechanical failure. So we backed away from the gate at about 5:15 and were in the air a few minutes later.

The 9-hour flight over the pond was fairly uneventful except for a screaming baby's outbursts about five times from about 10 rows behind us, and two stretches of turbulent air that lasted a few minutes each. 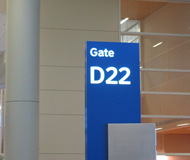