Wednesday was a free day, meaning that we had no group tours planned. The only thing we had to do was find the departure location for the tours the next two days – we wouldn't want to try to find it under the gun a few minutes before we had to leave! After eating some bread and jelly for breakfast, it took about 10-15 minutes to walk the few blocks to find the exact tour departure spot near the Hauptbahnhof.

We bought tickets, a combination pass to both the Residenzmuseum and Treasury that would allow us to come and go whenever we wanted that day. It took about 3 hours to completely tour the museum, winding through the halls of what was once the residence for the ruling family of Bavaria, the Wittelsbachs. Like all good monarchies, the Wittelsbachs convinced people that their claim to the throne was legitimate, derived from a direct lineage from early-century Rome or something like that. The first room of the tour was a hall of lineage, with portraits of monarchs going back many centuries. Also like all good monarchies, thee Wittelsbachs amassed a great fortune, elaborately decorating room after room, and collecting countless articles of gold, silver, precious and semiprecious stones, porcelain, paintings, etc. Apparently they were all very good at collecting all this stuff until Ludwig II came around and spent it all on his castles. That's tomorrow.

After the Residenzmuseum, we walked around a bit in the city center, stopping for a sandwich for lunch, eating on the steps of a building in front of a plaza across from the museum. We returned to the museum, this time going to the other side, the Treasury. The Treasury is a collection of priceless artifacts, mostly received by the several monarchs as gifts from other world rulers through the centuries. Crowns and jewelry dated from the 9th century, and more recent artifacts included carved rock crystal pieces, portable altars, and porcelain receptacles in all shapes and sizes.

Somewhere around 3:00, we headed north to the Englischer Garten, a large park with biergartens, a Chinese Tower, bike and horse pathways, and open fields for kicking around the football, playing Frisbee, or reading and sunbathing, with or without clothes. Yes, we saw a few semi-nude women and fully-nude men... things are different over on the other side of the pond. The long walk back to the hotel was about the same distance as from the BMW plant the night before, but this walk was in daylight, so we were able to see some minor sights like an Arch and some guys playing chess in the park, using 2-foot-tall wooden pieces on concrete blocks set into the ground.

We rested a while at the hotel and then set out for dinner – a small pizzeria we noticed the night before, just a couple blocks from the hotel. Travel tip: if you want “just water” to drink, the conversation will probably go like this: “zwei wasser, bitte,” ; “big water, 2 glasses?” ; “um, OK” ; then your “Tafelwasser” will arrive: € 4,50 for a 1 liter bottle of tonic water. A stop for gelato, and kaffe concluded the evening. We needed to take it easy this day and get to bed a little early, because the next day was one of the big bus tours, and we had to meet the tour bus around 8:00 am. 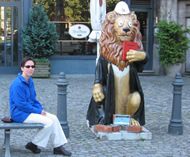