On Thursday, we accomplished one of the main objectives of the trip: two castle tours. Getting up before 7:00 and finishing off our bread and jelly for breakfast, we headed to the cafe down the street for kaffe and heiß shokolade, and made it to the Grayline tour pick-up spot across from the hauptbahnhof shortly after 8:00. All of us fit on the top level of the double-decker tour bus, Autobus Oberbeyern #187, and we set out toward southern Bavaria, through rush-hour Munich traffic, Wolfgang as our expert driver and Clark Snyder as our guide. Clark is one part Clark Kent and two parts Clark Griswold, a Seattle native who now lives in Munich much of the year but lives and writes music in Nashville, TN in the winter months. With an odd sense of humor, he pointed out the differences between our tour, #16, and #61, a tour of Munich park benches, and the fact that his boss is such a stickler that he prefers him to return with the same number of people he left with.

After almost an hour on the autobahn, we wound around part way into the Alps and arrived at our first stop: Schloss Linderhof, where Ludwig II had his primary residence for a short time until his mysterious death at the age of 41. “Mysterious” means declared insane by his uncle after having blown almost all of the family fortune on his elaborate building projects, placed under house arrest, and, though an expert swimmer, found drowned together with his psychiatrist in shallow water in a nearby lake. “Official” explanation: suicide. Right. Königschloss Linderhof is a little on the small side as castles go, but exquisitely detailed and decorated. “Exquisite” here means having fine wood carvings popping out at you from the walls and ceilings, overlaid with 24k gold, walls consisting of full-length canvas paintings, and furniture constructed from the finest fabrics, marble, and ivory from around the world. No photography was allowed inside the castle, but we took plenty of pictures of the building and grounds from outside.

After leaving Linderhof, the next stop was the town of Oberammergau, where we had 45 minutes or so to shop and walk around before getting back on the bus. After a short ride, we approached Schloss Neuschwanstein through a valley, the Austrian Alps rising to the South, our left, the castle visible from several kilometers away. Around 1:30, along with most of the people from our tour, we ate lunch in the town of Schwangau at Hotel Müller, which has a reasonably-priced and extremely fast restaurant. Then it was a hike up the mountain to the castle. Clark's map estimated the hike time at 45 minutes, a pretty conservative figure since most young to middle-aged adults could make it in 20. But stopping several times for pictures, of the castle above and the valley below, and detouring 10 minutes out of the way to the Marienbrücke for a breathtaking view of the hill the castle sits on took up every bit of the 45 minutes.

Again in this castle, no photography. The castle tour guide said something very vague about copyright, and Clark later questioned that and noted that he regarded weathering as the main issue: “one camera flash equals a full day of sunlight”. Just a few of the rooms of the castle were ever completed, so the tour was fairly short for such a large structure. We wound around through several rooms and hallways, all exquisitely detailed, ending up on the fourth floor of the main building, the largest room in the castle. Ludwig II was a huge fan of Richard Wagner, and this room was designed as an opera hall for Wagner's operas to be performed in. To this day, once or twice a week, that's exactly what happens. Oh, and as you'd expect from Ludwig, exquisite wood carvings covered the bed chamber from floor to ceiling – the wall panels, doors, and bed canopy were all hand-carved woodwork, an undertaking that took a team of four woodcarvers four full years to complete. Two of the unfinished rooms have since been turned into – of course – gift shops.

Upon our exit from the castle and the subsequent descent back to the town, there were plenty of opportunities to stop for a beverage and souvenirs, and to take some more pictures. We climbed back on the bus shortly after 5:00 pm and headed back to Munich by a different but equally scenic route, arriving at the bus stop around 7:00.

After stopping by the hotel to drop off the stuff we took with us, dinner was at Pizzeria di Tonino, a small (of course!) pizzeria just down the block. It was another fairly early night, since the next day would be another all-day bus tour, this one to Innsbruck, Austria. 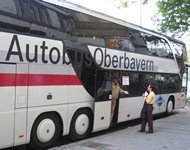 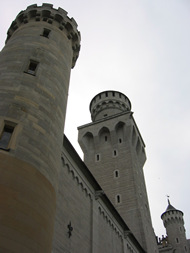