Friday was another full-day Grayline bus tour, this one an excursion through the Alps to the Swarovski Crystal Museum and the city of Innsbruck, Austria. We woke up around 7:00, grabbed a kaffe and bread thing from out favorite little cafe half a block away, and headed to the hauptbahnhof. We were happy to learn that Clark was our guide again, today. The first stop was the town of Wattens, home to the Swarovski Kristallwelten. If you like modern art, then you'd like the museum. The tour part is mostly underground. You enter the exhibit behind a large stone face fountain. Once inside, the first room has some great crystal pieces. There's a horse adorned completely with crystal attire. Then a modern sculpture with an abstract woman holding a crystal up, and a wall piece inlaid with crystal in a tribal type design. Finally, there examples of the biggest and smallest crystals. The biggest crystal is shaped like a diamond and is about 10 inches across. The smallest are in a lighted box which has a magnifying lens on top for you to see the detail. Each is slightly larger than a pin head. After this room you are led through a maze of modern art pieces. There are paintings, digital movies and displays, and fiber optic pieces. At the end is the gift shop, the part we enjoyed most because it had beautiful crystal pieces in all shapes, sizes and colors. Monkeys, birds, fish, musical instruments, and lots of jewelry. Outside the tour site is miles of gardens. Modern sculptures dot the area as well as a zip line and playground for kids. We spent some time walking the grounds.

We got back to the bus for the ride into Innsbruck, the site of the Winter Olympic Games in 1976, the year Ginger was born. We parked in a huge bus lot, then follow Clark to the edge of the outer city, a short walk. Once we entered the walls of the old city, everything changed. There were people everywhere! It was a crowded square filled with cafes, shopping, and other stores. We split up at the golden roof. There's a 3 story tower on the side of one of the buildings that has a golden roof. We were free to go our own ways until later when we'd meet up again to get back on the bus.

We walked around the square and chose one of the restaurants on the main street and enjoyed some wonderful pasta dishes. Ginger had the spinach cream linguine and Neil had the chicken and broccoli cream linguine. Simply delicious! Then we wandered around the city. We walked up to an arch monument which commemorates a wedding and a death. The strange thing is that the groom died during the wedding! We continued on our way and stopped at a Gelato shop, then it was time to head back to the bus.

The drive back through the Alps was absolutely beautiful: we returned to Munich following a different route than we rode in the morning, seeing, among other things, Zugspitze, the highest peak in Germany. We got back to Munich early enough that we could walk around a bit more, after, of course, getting a sandwich for dinner at the little cafe down the street. We took off to the east, into the heart of the city center, strolling through Karlsplatz and the world-famous Marienplatz, where it looked like a lot of people and shops were geared up for Oktoberfest. Most of the stores were closed late in the evening, but the cafes and beer houses sure were hopping. We walked past dozens of the now-familiar painted lions throughout this part of town. 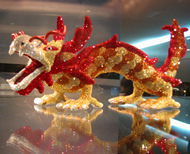 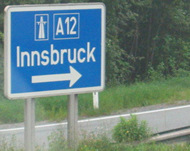 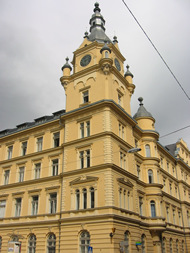