Saturday was the official start of Oktoberfest, with a small parade and an official ceremony, but the bigger celebration and parade was not going to be till the next day. For us, this was a free day in Munich, meaning that we had nothing planned, nowhere to be at any particular time. It is cheap to get a day pass for the MVV (public transportation), €8,80 for a ticket that will get up to four people as many rides as they want by bus, tram, or underground railway anywhere within a 24-hour period. So we got one of these and planned to see a couple sights that were a good distance away from each other; an added bonus was that we were changing hotels for that night, so we were able to go a good distance to and fro with our one pass. After grabbing a pastry and kaffe (this time from a different bäkeri, one that was open), we set out toward Marienplatz so we could do some shopping early in the day, before the Oktoberfest-goers got too rowdy. We saw a few floats (decked-out horse-drawn carriages) that were bound for today's smaller parade, and walked around the plazas a bit.

Keeping with our “Castle Tour” theme, we decided to tour the Schloß Nymphenburg next. We set out across town with our trusty tramway passes. The Schloß Nymphenburg is absolutely enormous, a huge expanse of interconnected buildings set around a center entrance area. And behind the palace, the grounds stretch for acres and acres, actually a large park with groomed lawns, gardens, fountains, and walking/jogging paths.

After a tiring walk through the park, we exited, got some lunch (yes, a sandwich at a little cafe), and headed across town the other way on the tram, bound for the Deutsches Meseum. The Deutsches Museum is, as a friend of Ginger's described it, “a museum that has everything but art”. We would describe it succinctly as a museum of the history of science and technology. It's very extensive, with exhibits ranging from music to electric power, from pottery to marine transportation, from bridges to aerospace technology.

After the Deutsches Museum, it was evening, and becoming time to find our new hotel. Thankfully, we were able to store our luggage at the Ibis for the day, do we dropped by there and picked it up on the way to the Hotel SchreiberHof. We were able to get the underground train from the hauptbahnhof to near Aschheim, a suburb of Munich where the hotel is, and from there, a bus ran into town, stopping directly in front of the hotel. An Italian restaurant across the street (probably the only other business in town that was still open) served nicely for dinner, and then we retired to the hotel. The SchreiberHof is quite a bit nicer than the Ibis near town, but even so, we were glad we hadn't stayed there all five nights for two reasons: The SchreiberHof is quite a bit more expensive and a lot further from town. 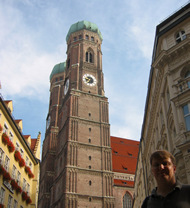 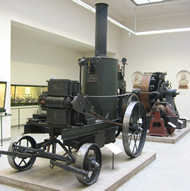