From München to Nantes

Sunday was the day we jorneyed from Germany to France, flying from München to Paris and then taking the train on to Nantes. A 16€ cab and a 18€ train ride got us to the Flughafen München – and from there it was a fairly smooth check-in to get on the 11:00 am Lufthansa flight to Paris. We boarded and took off right on time, landing in Paris at Charles de Gualle even a few minutes ahead of schedule. It was a good thing, too, because it took about all the time we had to get to the train station – the train station is right there at the airport, but de Gualle is one of the busiest airports in Europe, and it takes a while to get through the crowds and around on the shuttles. We stood in line at the train station for a few minutes, the departure time rapidly approaching. We had not booked the tickets in advance for a couple reasons, so we had to buy tickets for the train to Nantes as well as the return trip two days later, but to a different station in Paris – this is where Ginger's French came in handy! We got to the train platform with less than 10 minutes to spare, and actually had to wait a few minutes for it. If we hadn't gotten this train, it would not have been a disaster, just the inconvenience of a 3-hour wait for the next one.

The ride to Nantes was a pleasant one, but once we got there, we had a little trouble. It was quite a walk to our hotel; well, if we knew the transportation system it would have been a fairly short ride, but we knew by a map where to go, so we decided to walk it. There was a light rain for a few minutes that made us think we'd made a big mistake, but it turned out just fine since our stuff didn't get too wet. We ended up buying tramway tickets for one leg of the trip, and it turned out that the stop where we got off was right in front of our hotel, the Ibis Nantes Centre Tour Bretagne. After checking in and getting our bearings, we figured out what we needed to do to get around town on the transportation system, the Transport de l'Agglomération Nantaise, or "TAN", and bought a 24-hour pass for 4€, and took the tramway down to the main business center, Place du Commerce. A sandwich did us just fine for dinner again, and we did some walking around before heading back to the hotel for the night. 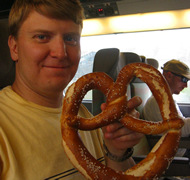 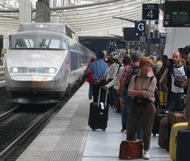