From Nantes to Paris

On Tuesday, we slept late and then took the tramway over to Place du Commerce to grab some breakfast. Neil got his standard coffee, Ginger had a hot chocolate, and we both got some croissants. We continued walking around that part of the city, seeing a few of the FAC areas (FAC is short for Faculté which is a university level school), and the saw the dental school and the medical school. We also saw Hotel Dieu: translated, it means “Hotel of God”, but it is actually a hospital. A similar situation applies for city hall, called the Hotel de Ville. About 10:30 we got backto the hotel, got our stuff together, and headed for the train station for our noon train to Paris. It’s only about 3 hours by train to there from Nantes, a pleasant ride actually with lovely scenery along the way.

When we arrived in Paris, we headed for our hotel, the Grand Hôtel du Calvados in the cneter of the city. While we did have a reservation, apparently the hotel had been overbooked and there was no room. The manager proposed taking us to another hotel where he’d reserved 5 rooms. It was obviously high time in Paris and almost all hotels were completely full that night. We agreed (we had no choice really) and he drove us to the hotel. He had already sent 2 groups to the hotel, we were the third, so it’s good he’d reserved five! The hotel itself was nice and the room was adequate, but the location was terrible. While it was safe by American standards, it was on the wrong side of the tracks, and much farther from the city center, which meant a longer Metro ride to the place we needed to catch the tour bus near the Louvre. We had booked two tours during our time in Paris - both were all-day tours that began at 7:00 in the morning and lasted until after dark. We had to be at our tour pick-up spot the next morning before 7:00 am and so we made arrangements with the Hôtel du Calvados manager that he would collect our luggage the next day and take it to his hotel. We would arrive that night with our bags in our room and would have a guaranteed room for the next night as well.

We left our bags at the “new” hotel and ventured out into the city. We also wanted to find the pick-up spot of the tour since we’d have to be there so early in the morning. We wanted to know exactly where to be because we wouldn’t have time to lose! We found the spot rather easily and continued walking around the area. We went to the Tuileries Garden, an expansive place in front of the Louvre museum. At dinner time we found a sandwich shop that actually sold fruit cups, something we'd never seen before in France. We sat on bar stools next to a tiny table attached to the wall. Then we continued our walk, passing top-of-the-line very expensive jewelry stores, the Opéra Garnier, the Louvre, and the Ritz hotel. In front of the hotel was a Ferrari, Maserati, a Bentley, and of course several Mercedes (the standard taxi car). We grabbed two croissants for breakfast the next day, then headed back to the hotel. 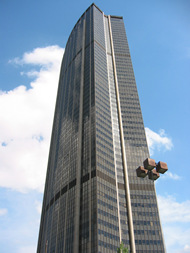 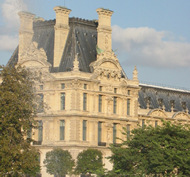 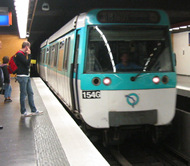