We didn’t sleep much, and had to get up about 5:30 am to make it to our tour pick-up spot before 7:00. We took the metro to the area and walked up the street. We actually arrived early enough that Neil could get a cup of coffee from a nearby café. This was the castle tour (in French, it’s château). After fighting rush-hour Paris traffic, our first stop was the château of Chambord. The castle is huge. It was actually so huge that it was a major problem to heat the rooms, and so the kings didn’t stay long when they stopped there. Because there was no mass media, the king had to travel the country to show everyone who he was and to win the goodwill of the people. So the king only stayed in this castle about 6 weeks total. There is very little furniture here, and the most interesting internal feature is the staircase. It is actually two staircases that spiral from the ground to the top floor. What is amazing about them is that they are intertwined but never meet. What you come to see really at this castle is the outside. There is intricate detail in the stone and slate made columns and towers. You can walk the perimeter of the roofline and that’s where you want to be to see all the complicated patters made using the different stones. After some free time to look around, we all get back on the bus and head for Chenonceau.

Chenonceau is Ginger's favorite château, and she was so glad to share seeing it with Neil (and, of course, Neil is glad to be a part of it also!). It’s one of the most beautiful you can find. There is contention in its history as it was built by the king for his mistress. The mistress was eventually expelled and the queen took it over. One of the things about this castle that makes it so interesting is the fact that it’s partly built over a river. The main structure is on the riverbank along with the watchtower. The part that is across the river is a long gallery with a black and white checkered floor. It must be said that the king took it upon himself to go to war with Italy (boredom? There hadn’t been a war for awhile apparently?) and while no military success was had, there was great cultural gain. At the time, Italy was much more culturally developed and had a much richer artistic culture than France. The king and his men brought back many ideas and people with them to infuse their art and talents into French culture. This particular château was designed by ladies, so there are feminine touches everywhere. At the end of the gallery is an ornate structure which is like a fireplace but has no place for a fire. The French liked the Italian art, but didn’t know how to make it functional, so they just decorated the space. At this château you are able to go into a great number of furnished rooms and even into the kitchen, which is laid out as perhaps it had been in the time it was in use.

Our final château is Cheverny. This one is actually inhabited by the owners. They live on the third floor, while the first and second are accessible for tours. This castle is fully furnished, almost too furnished. Each room is decorated but you cannot actually enter them all, there are gates over which you can look at some of the doors. The grounds of this place are immaculately well kept and there are signs everywhere asking you not to touch things and not to walk on the grass. This is a hunting area and outside are stables and a dog run. There must be about 70 dogs in the pen. There are so many that they are practically forced to sleep on top of each other. There are also horse stalls nearby. You can smell “animal” from quite a ways away.

It’s finally time to head back to Paris. We all get onto the bus and arrive in Paris at about 9:30 pm. We got to our “original” hotel, the hotel du Calvados, and indeed, the bags are there as arranged. Whew! Praise God! We head out to grab a bite for dinner and stop in at a bustling pizza joint. We wait for a table to be cleared and order a pizza to split and a carafe of water. To our amazement, we are refused service. Apparently that type tab is not enough for her. We glance back at the menu while she walks away to give us a chance go decide on something else. We quietly leave the area. Our hotel has a pizzeria on the bottom floor. We take that option and have a great meal, and yes, we split a pizza and get a carafe of water. But Ginger got some fruit juice just because. 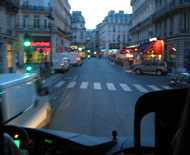 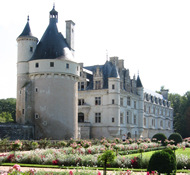 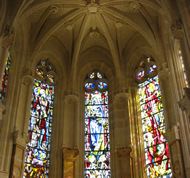