Thursday was our last tour, a full-day excursion to le Mont Saint-Michel.

We woke up early in the morning (but not as early as the day before, since our hotel was somewhat closer), and headed out on the Metro to the tour pick-up spot. We had noticed that the little café nearby was open really early, so we knew we could stop there for a croissant and café au lait before we had to get on the bus. We boarded shortly after 7:00 am, as the sun was barely coming up.

It was a long trip out to the Mont Saint-Michel, about 5 1/2 hours (well, 4 1/2 plus an hour or so to stop for meals). After fighting Paris morning traffic and spending a couple hours on the highway, we stopped for brunch at the Hotel du Dauphin in a little town on the way. We hadn't realized it till then, but this brunch and a dinner stop were included in the price of the tour.

Back in the bus, we continued along the country roads, our tour guides (Elisabeth spoke in French and Bruno spoke in English with a French/British accent) pointing out interesting sites along the way. Of particular interest was the answer to a nagging question: what did "Calvados" (the name of our hotel) mean? Calvados is a type of apple brandy, an alcoholic drink made from apples - our tour guides explained that this region is full of apple trees and that calvados is produced here en masse.

After a couple hours on the road, we finally reached the coast of Normandy/Brittany, the Mont Saint-Michel visible from quite a long way off. We arrived about 1:00 in the afternoon, and split up into two groups for the guided tour, the French speakers following Elisabeth and the English speakers following Bruno. Ginger went with Neil and the English group :). The hour-and-a-half tour was excellent - Bruno explained just about everything from the ground up, from the history of the beginning of the construction of the abbey to the geographic features of the land to the later construction of other buildings on the Mount to some of the key people in its history.

After the guided tour finished up, we had about an hour of free time to explore, to walk down the Mount through the little "town", and do some shopping. Of course we picked up some ice cream along the way!

About 4:30, it was time to rejoin the bus to head back toward Paris. After another two hours on the road, we stopped in the city of Caen, at a World War II Memorial, for dinner, a buffet-style meal that featured roast duck, a salad bar, several desserts including apple pie, and really good coffee. After a long but very worthwhile day, we finally arrived back in Paris around 9:30 pm. 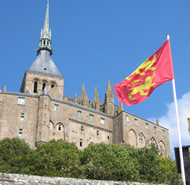