We had planned to go to Chichen Itza on our final day, but decided that since it took an entire day we would do the half day Tulum excursion instead. We heard Chichen Itza was sweltering hot with little shade, and long, about 8am to 7pm. The Tulum excursion let you see ruins without taking up the whole day. We got on the bus in the morning and our tour guide explained some of the architectural highlights about what we would see as well as some Mayan history. We arrived at the park where he guided us around the site and highlighted various items of interest. We then had free time of about an hour for pictures. The place also had a great many iguanas walking around and sunning themselves. There were people who walked down the staircase along the cliffs to the beach below. It was beautiful. Since we didn’t have our swimsuits, we didn’t go down to the beach, plus, it was so sweltering hot we didn’t want to have to walk all the way back up! It was a very interesting site but the heat really sapped your energy.

According to the guide, there were two classes in the Mayan civilization. There were the royals and the slaves. There was no movement among the classes, that is, a slave could never become royalty. The slaves revolted and overthrew the royalty. Unfortunately, the royals were the ones who knew the times of harvest, rain, etc and when they were all killed by the slaves, the slaves were forces to retreat to the jungles to live because the knowledge the royals had was completely lost. The Mayans are of Mongolian decent, and there are still Mayan people in the world today. They live in primitive conditions and are quite poor.

Upon our return to the bus, we made a stop at a Mayan market. The tour company had made a deal with this particular store agreeing that all the works would be actual handicrafts made by the Mayan people and would, as desired, contain real Mexican silver and real gemstones. The guide emphasized more than once that other vendors may not be using real silver and gems in order to push the idea that it was better to get any tourist goods at this particular market. We were so tired we didn’t go in but stayed in the bus instead to rest. We noticed not many people bought items in the store, one person even saying the items were overpriced. We’re not the Mayan Art types, so it’s good we decided to stay in the bus.

We returned to the hotel where we ate from the incredible lunch buffet at El Greco. Then, again, it was time to lie around by the pool and walk around to a couple different areas of the resort before to dinner, again at La Trattoria. Ginger just had to have another Ribeye, and Neil ordered a dish of ham-and-cheese-stuffed chicken. 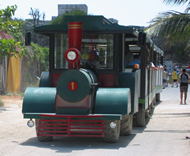